Say “no” to the moon and Mars!

I was watching the news last night and I saw that President Obama took advantage of the 40th anniversary of the first moon landing to meet with the three Apollo 11 astronauts. They encouraged the President to endorse a program to send men to Mars. There are already preliminary plans to return to the moon by 2020, and now these guys, as well as others, want to keep going on to Mars. My reaction – “Are you out of your mind?”

Please understand, I grew up in the 1960’s and was fascinated by the space program. I remember sitting in class watching Alan Shepherd’s first launch on a small black and white TV. I followed the Mercury and Gemini programs religiously. When I was bored in school I would doodle pictures of astronauts on space walks in the margins of my notebooks. 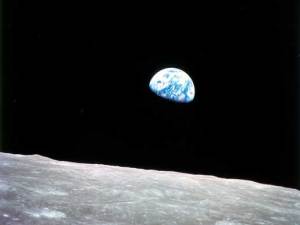 I remember being moved at the Apollo 8 astronauts’ Christmas Eve 1968 telecast from lunar orbit where they read the Book of Genesis as the camera showed the Earth rising over the lunar horizon.

And I remember sitting with my family on the afternoon of Saturday, June 20, 1969, when we first heard Neil Armstrong’s dry, understated transmission, “Houston, Tranquility Base here, the Eagle has landed.”

I think space exploration is great, but it is a luxury, not a necessity. And it is simply a luxury we cannot afford. Space exploration costs enormous sums of money — tax money. It is money we don’t have. Didn’t we just borrow something like a trillion dollars from lenders like China and Saudi Arabia to bail out the Wall Street idiots who tried to send us into the next Great Depression? We have plenty of problems right here on Earth that will account for all our affordable and non-affordable tax dollars. These are issues that actually affect the lives of real human beings – health care, hunger, education, crumbling infrastructure, defense, and so on. Non-commercial space exploration has no tangible benefits except to those scientists, technicians and companies actually working on the projects.  It’s fun; it’s exciting; it’s inspiring;  but it is not necessary when we are borrowing to the hilt from other countries just to take care of the urgent needs.

Compare it to a family budget. Expenses like defense and education are the national equivalent of buying the groceries and paying the rent. Space travel is like taking a vacation – fun, inspiring and exciting, but not necessary. It makes no sense for a family that is borrowing from their credit cards to pay for food and utilities to plan a European vacation. Likewise, it makes no sense for a nation that is up to its ears in debt and sinking deeper to spend massive amounts of money on space travel.

This may sound weird from someone who works in a scientific research laboratory. The issue is different. I’m not suggesting we shut down scientific research. That must continue. We simply do not know enough about any of the sciences to solve the current and future problems we do and will face. For better or worse, scientific research in this country is funded primarily by tax dollars. No matter how basic, or seemingly bizarre to the non scientist, most of that research will eventually have some affect on our world or the people in it – not so for extravagant space ventures.

We shouldn’t be planning an expensive European vacation until we can afford to pay for the utilities and groceries.