I read a report a few days ago that the #1 stolen car last year was the 1994 Honda Accord. Second and third place went to a 95 Honda Civic and an 89 Toyota Camry. 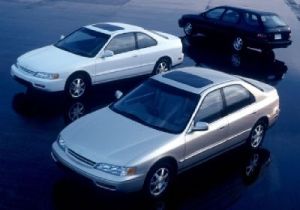 Most popular with car thieves?

My first reaction was surprise that there were that many 15-20 year old cars still driving around out there that they could be top rated anything.(Writer Princess is driving a 94 Accord, so maybe I shouldn’t be so surprised.) My second thought was “Why would someone want to steal a 15-20 year old car when there are a lot more newer cars driving up and down the street?”

I guess it says a lot for Honda and Toyota that their old models are in such demand. Apparently, one reason is the demand for spare parts. That presents an interesting business model. The more old Hondas you steal to increase the supply, the fewer cars are left to need the parts. I’ll bet there are some real sharp economists figuring out that supply-demand curve.