In the ongoing struggled between celebrity and substance, chock up a big W for celebrity. Our president has won the Nobel Prize for Peace. What is that all about? 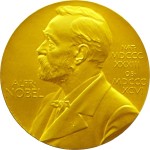 Somewhere I got the obviously mistaken notion that Nobel Prizes were awarded for a person’s accomplishments. Apparently that is not correct. President Obama was a freshman senator who was elected President primarily because he talks a great game. That’s OK. That is why politicians get elected – they say the right things and inspire people to vote for them.

Aside from getting himself elected, can anyone honestly point to anything of world-significance that the president has actually accomplished?

On the international scene, he has given a lot of speeches, but he hasn’t solved any world problems. The Middle East is still a mess. There are plenty of countries with nukes. People are starting to compare Afghanistan with Vietnam. And so on.  Granted, he is only nine months into his first term, so you can’t expect very much at this time. That is the point! He is less than a year into his first term as president, with nothing but words and “visions” on his record.

Please understand, my beef is not with the President.  He didn’t apply or lobby for the prize; the Nobel Committee just gave it to him.  But what was the committee thinking?

Well, I guess they are now handing out Nobel prizes for celebrity. Maybe Paris Hilton should submit her resume for next year.

On the other hand, maybe this is just Scandinavia’s way of sending the President a “make-good” for the slap down he received from the International Olympic Committee in Copenhagen last month.