We had a very good St Patrick’s Day celebration yesterday. I was so tired when we got back home in the late afternoon, I could barely move. It was a good day.

As always, we started very early. Mrs. Poolman and I arrived at 5:30 am for the 6 o’clock opening of the squares. After a few minutes of negotiating with the people who had arrived earlier, we settled on our site and awaited the 6 am hour. Our site was good, but not great. We were on the perimeter of the square,  but just a few yards off that one-half of the square where the parade actually passes.

Our tailgate site, just before the sun came up.

Our tailgating neighbors in the early morning.

Most of the other people arrived between 8 am and 10 am. By the time the parade started passing by around 10:20 am, we had a full house. We spent the next several hours eating, drinking and, as they say in the South, “visiting.” 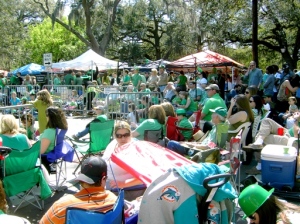 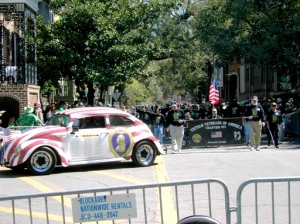 We had a diverse group, ranging from Mrs. Poolman’s co-workers, to my children’s friends and various other friends and neighbors. 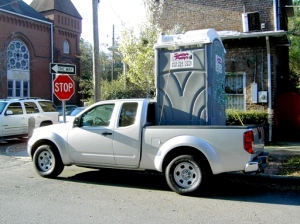 In fact, it was a little too much of a hit. Some of our friends had a separate tailgate party set up for their family in the same square. They made a contribution towards the porta-potty fund for their group of — they said — around six people. Actually that group of six was closer to sixty. Oops! The result was sometimes the lines at our porta-potty were longer than those at the public stalls. Poolboy became annoyed when one of their guests challenged his right to use the potty. “Hey, this is MY mother’s potty!” (Aren’t those words t0 make a parent fell proud?)  Next year, they say, they will get their own. That’s a good idea.

One response to “A great St Patrick’s Day in Savannah”