A day of airborne history

On Sunday morning, we awoke to a breakfast of ham, cheese, yogurt, fruit and pastries, The buffet included the Norman version of an apple pie and a custard pie. Interesting.

(By the way, click on any photo for a slightly larger version.)

We were off bright and early for a day-long tour focused on Utah Beach and the related airborne operations on D-Day.

"The gang" mounting up

Before we left, Dan and I went for a stroll in the central city area around our hotel.

Central Bayeux looks like the Hollywood version of an older European city. Dan said, he almost expected to see Belle from “Beauty and the Beast” to coming dancing around the next corner, singing “Bonjour, bonjour!”

The sun was just a coming up and the light was interesting. I took several pictures of the thousand-year old cathedral and some street scenes.

The Bayeux Cathedral at sunrise

Once on the bus, our first stop of the day was Ste. Mere Eglise, the first French town to be liberated by the allies in 1944, and what Steve (military guide) described as the airborne equivalent of Mecca.

We toured the airborne museum. It was very well done. It included an authentic Douglas C-47 transport, set in a scenario as if it were being loaded on June 5.

The C-47 (military version of he venerable DC-3 civilian passenger aircraft) was the plane on which our father served as a navigator in Italy.

From the airborne museum, we walked across the street to the “eglise” (church) of Ste. Mere Eglise.

If you recall the movie, “The Longest Day,” this church figured prominently in the movie, and apparently, it was actually shot here on location. Paratrooper John Steele, played by Red Buttons, got caught on the steeple. To commemorate that, the church still has a dummy and parachute hanging there. It’s kind of cheesy, but effective.

The inside of the church is lovely.

There are two stained glass windows that commemorate the liberation, one with the Virgin Mary and the other with the archangel Michael, both with paratroop images in the design.

Stained glass of St. Michael. Note the parachute above his head and the logo of the 82nd AB to the left.

We had a very traditional French picnic with baguettes, pastries and drinks, purchased from a nearby shop. 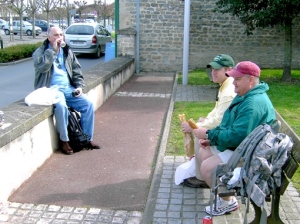 I had a foot-long, fresh baguette, stuffed with chicken, lettuce, tomatoes and mayonnaise. The French pastry was great. I topped it off with a Diet Coke, or Coca-Cola Light, as they say here. The price came to just five Euros, or about seven dollars. If they opened stores like this in Savannah, they’d drive Subway out of business.

After lunch, we drove to Utah Beach. The museum there is closed for renovation, so to be honest, there really isn’t much to see there.

Nearby, however, we had special access to Brecourt Manor. This is the Norman dairy farm featured vividly in the second episode of Band of Brothers. Then Lieutenant Dick Winters lead a small group of paratroopers to successfully destroy a battery of German artillery that was threatening the troops coming ashore a few miles away. This is private property and not normally accessible to tour groups, so this was a treat. The start of our mini-tour was amusing. The short dirt ramp to the cow pasture was completely covered in cow manure. Everyone spent the rest of the afternoon wiping their feet and picking at their treads with sticks.

Birdie, working his way through the dung.

Steve led us through the pasture (“Rule one – don’t disturb the cows!”) to the adjacent pasture where he outlined the operation.

Dan moving under a fence from one field to the other.

Steve explains it all.

Our next stop was Ste. Mere du Mont. We had our picture taken in front of the World War I monument, in the same location as a group of 101st troopers had their picture taken on D-Day. That photo is included in the Band of Brothers book.

Poolman, Dan, Ron and Birdie in front of WW I monument.

Our final military history stop of the day was La Fiere, a crossing over the Merderet River that was the scene of some heavy fighting involving the 82nd Airborne on D-Day.

Close by is a chateau and a B&B. We got to talking to the American woman who owns the B&B. She suggested we walk over to the chateau, saying that the owner is a nice guy and he has a bunch of old souveniers he has collected from the area. The chateau owner,  Yves Poisson was most gracious. He pulled out an old reserve parachute he had.

The parachute at La Fiere

He also showed us some of his collection of battlefield artifacts.

We returned to St. Mere Eglise and had a very nice dinner at the John Steele Tavern.

As we walked down the street to dinner, we passed a vivid example of one of the differences between European and US culture – a condom machine on the sidewalk of one of the town’s main streets.

When you just can't wait.

Sometimes I guess you just can’t wait for the pharmacie’ to open.

Over dinner, Birdie continued his European version of the “Blue Collar Comedy Tour.” Dan and I had left our window open in our hotel room, and Birdie and Ron started discussing whether we would have pigeons in our room when we returned. Birdie assured us that if we did have pigeons when we returned, there were no two better people on the European continent to handle the problem than Ron and himself.

Birdie said he really hoped we did have pigeons in our rooom, because he wanted to use the rocks he collected from Omaha Beach to kill them. Then he said he would cook them overnight on the steam radiator.

“I think if we put a towel down to collect the drippings, we’ll be fine. God knows that radiator gets hot enough.”

Birdie has had a continuing theme of cooking birds in his hotel room ever since Paris.

Fortunately for both us and the Norman pigeon population, there were no birds in our room when we returned.

We got back to our hotel in Bayeux fairly late, and after updating this blog, we hit the sheets for another early day tomorrow.

3 responses to “A day of airborne history”