A good book — The Capitol Game

I just finished a pretty good book, The Capitol Game, which is the latest from thriller author Brian Haig. The summary from the fly-leaf describes the plot as well as I can. 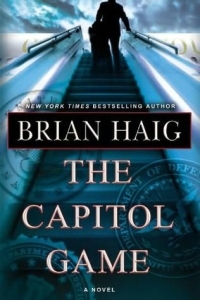 “It was the deal of the decade, if not the century. A small, insignificant company on the edge of bankruptcy had discovered an alchemist’s dream; a miraculous polymer, that when coated on any vehicle, was the equivalent of 30 inches of steel…Jack Wiley, a successful Wall Street banker, believes he has a found a dream come true when he mysteriously learns of this miraculous polymer. His plan: enlist the help of the Capitol Group, one of the country’s largest and most powerful corporations in a quick, bloodless takeover of the small company that developed the polymer. It seems like a partnership made in heaven…until the Pentagon’s investigative service begins nosing around, and the deal turns into a nightmare…”

I have been a Brian Haig fan since I read his first novel, Secret Sanction, several years ago. The Capitol Game is Haig’s eighth book. While he has never achieved the acclaim of a Nelson DeMille or John Grisham, his books are just as entertaining. The protagonist in his first several novels is an Army JAG lawyer, Sean Drummond. If you overlooked the books’ covers, you might have thought you were reading Nelson DeMille (who, by the way, is one of my favorites.) Drummond could just as easily have been one of DeMille’s frequent protagonists under a different name — Army CID investigator Paul Brenner (The General’s Daughter and Up Country) or former NYPD detective John Correy (Plum Island, The Lion’s Game, Nightfall, etc.)

In The Capitol Game, Haig breaks away from the Sean Drummond formula and creates an entirely different set of characters and a story type. This book reads an awfully lot like a Grisham novel. The somewhat mysterious main character is obviously working some kind of scheme, but the reader isn’t quite certain what it is. The protagonist, Jack Wiley, is a charismatic, young investment banker, but Haig only reveals his actions, not his inner thoughts. Not until the last few pages does the plot come to light and the motivation become known.

All told, The Capitol Game was a fun book and I recommend it. If you enjoy Grisham and DeMille, you should enjoy this and the rest of Haig’s books.

2 responses to “A good book — The Capitol Game”