Mrs. Poolman and I finished off our weekend by watching (Blu-Ray) “Flight” with Denzel Washington, John Goodman and Bruce Greenwood. It was a very good movie. (Has Denzel made any bad ones? Not that I recall.) 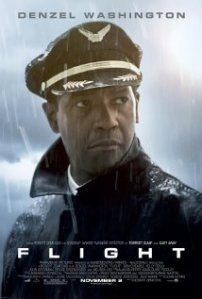 Washington plays an airline pilot, Whip Whitaker. When his airliner experiences a catastrophic equipment failure, he saves it from crashing by rolling it upside-down, and then crash lands it in a farm field with only a few fatalities. This would make him a major hero, except for one thing. As is established in the first scene of the movie, Whip is an alcoholic and cocaine abuser. He was drunk and high when he was at the controls. The irony is his impairment didn’t contribute to the emergency. As depicted in the film, his piloting was phenomenal, but he was impaired all the same.

The depiction of the airborne emergency is intense and riveting. It will put you on the edge of your seat. To some extent, the rest of the film is an adrenaline let-down. However, Washington does a great job portraying a self-destructive man who is struggling with is addictions, but also living a lie. As a viewer, I found myself torn between wanting him to escape his just due and hoping he will get off. I won’t spoil the end for you.

This is not a movie for kids. The flight scene is extremely intense. Also, the first half of the film has plenty of nudity and vulgar sexual dialogue.

If you haven’t seen this movie, it’s one you should rent and watch it soon. You won’t regret it.