Another reason to be happy…

Of course, I’m not talking about the kind where you stand under streaming water to get clean. I’m all in favor of those. I’m talking about bridal showers, baby showers, and any other kind of showers that are little more than shake-downs, cleverly disguised as social events.

Mrs. Poolman and I were looking over our calendars for the next month or two to see what is coming up. Mrs. P noted that on one weekend later this month, she has a baby shower on one day and a bridal shower on the other.  I am SO glad neither of the hostesses was crazy enough to declare one of the events a “couples shower.” I hope I don’t give anyone an idea.

I understand the concept behind the showers. In theory, a group of the bride’s/new mother’s friends get together to “shower” the recipient with gifts to help them get started with their new married life or parenthood. Great idea. Keep it to the friends and immediate family who really want to help, and I’m all for it. What happens however, in an effort to increase the mass of presents, the guest lists extends out another generation to include the friends-of-family, etc. Attached to that invitation is an implied social obligation to pony up a gift and attend, whether you want to or not. Saying “no” is not an option. (“You know, when our daughter gets/got married…”)

In the case of the upcoming bridal shower, Mrs. P was invited because the groom’s mother is a long-time co-worker. I’m not sure Mrs. P would recognize the bride if she bit her on the leg.

The family organizing the baby shower doubled down on the misery. It seems the honoree and her sister had the poor timing to get knocked up with their first child within a few days of each other. (Must have been a heck of a weekend!) So the family decided to have a double baby shower.

That is an insidious little trick. At face value, it looks like a great idea. The more the merrier, right? But think about it for a moment. While family members obviously have connections to both mothers-to-be, many of the friends may be close (or maybe not really even that close) to only one of the guests of honor. Even so, they are now arm-twisted by a social obligation to purchase gifts for both of them.  (“The shower is for both sisters. I CANNOT show up with only one present.”) Nice trick.

I had an idea for Mrs. P to reduce her invitations to future showers, at least the bridal showers anyway. One of her good friend’s, daughter’s, partner (It’s complicated, sorry.) manages a sex-toy shop. I suggested she shop there for the bridal shower gift — the larger and more inappropriate, the better.

Her gift would certainly be remembered, and maybe even appreciated. You certainly can’t say the same thing about that off-brand chafing dish, or a cutting board. Plus, the word would get out and she would probably receive significantly fewer invitations to future showers.

Two birds with one stone.

Although Mrs. P laughed at my idea, she rejected it quickly. (In her defense, I think she really enjoys these girl-parties. These opinions are my own.)

“Showers – they are part of the girl code.”

And that’s one more reason…

I do love Klondike bars

I saw this e-card the other day and laughed. I can’t say I’ve ever done anything I’ve been ashamed of, but I hardly ever turn down a Klondike bar. 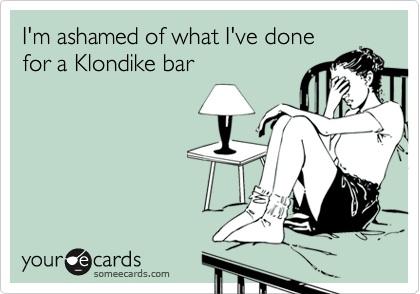 In an earlier post, I discussed some of the differences between men and women. The other day at work several of us were talking about another significant one – the way we use the telephone. With Mrs. Poolman and me, there is a very clear difference in how different we view things.

I will answer any call, but I feel absolutely no obligation to have a lengthy conversation with who is calling.

“OK, I’ll be happy to pick you up in the morning. But I’m a little busy right now, so I need to go. See ya later.”

Boom! It’s over. That’s it. And if it’s a guy on the other end of the call, no offense is taken.

Mrs. P, on the other hand, will not answer her phone unless her called ID shows its someone with whom she wants to spend at least a half hour talking. The person calling may just have a simple question, but they won’t have the chance to ask if Mrs. P doesn’t have at least 30 minutes of free time on her hands. The same goes for outgoing calls.

“So why don’t you call Karen and ask her what time we should pick them up tomorrow?”

“No. I really don’t want to take the time right now to listen to her tell me everything she did today and everyone she talked to.”

“You do realize, don’t you that you have the power to say good-bye and hang up.”

“You’re a guy. You don’t understand.”

Yup, she’s right about that.

Then there is the issue of calling someone just to chat. I call my out-of-town family to ”chat,” because it’s the only way we can keep in touch. However, I cannot imagine calling one of my local guy-friends just to pass the time. I’m trying to imagine calling Matt the Welder.

Me: “Hey, Matt, this is Poolman. So what are you having for dinner tonight?”

Me: “I just wanted to see what you were doing.”

Matt: “Seriously, dude. What do you need?”