Good bye to a good dog

We had to say goodbye to our 14-year old Labrador Retriever, Casey, last week. Casey had been failing for some time. His cataracts left him mostly blind and we really don’t think he could hear a thing anymore. He had a bad case of arthritis in his back legs. As a pet owner, you always hope you will know when it is the right time to put your pet down — not too soon, but not too late either. We think it was Casey’s time. 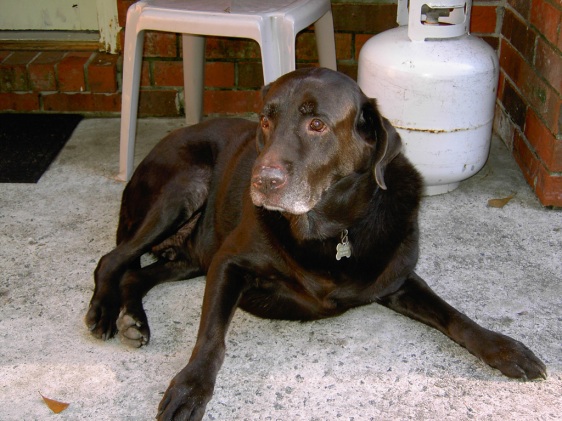 We adopted Casey in January 2003 from a lab rescue group in Atlanta. We had driven to Atlanta and spent the night so we could be at the “adoption day” event bright and early. Casey won Mrs. Poolman’s heart when he leaned up against her leg and just slid down her leg to lie on his back in a definite “Please scratch my chest” pose.

As it turned out, Casey wasn’t the brightest dog in the animal kingdom, but he may have been one of the sweetest. That was one of his two definitive personality characteristics. He loved children. When he was still spry enough to go on walks, I used to joke that he was the post popular kid in the neighborhood. Small children would literally run out of their houses, calling his name. When we stopped, they would hug is neck, and he would respond with a big slurp on the child’s cheek.

His other defining characteristic is that he loved to carry things around in his mouth. He rarely chewed anything, but he had a real oral fixation. Shoes, stuffed animals, you name it. If he could pick it up, he would carry it. He wasn’t really a very good retriever, because, although he liked to chase and fetch, he didn’t want to give up whatever he had. He loved rolled up newspapers. They were the perfect size and shape. The highlight of his day was to fetch the morning newspaper from the front walk. He was known around the neighborhood as that well-trained dog that fetches the newspaper. “How did you teach him to do that?” We hated to tell people that he just came that way.

Shortly after he came to live with us, my brother- and sister-in-law came to visit us. Brother-in-law was carrying some luggage in from his car and his home newspaper was dangling from his hand in its plastic bag. They had not met Casey before, so he was shocked when Casey came running up from behind, jumped and grabbed the newspaper right out of his hand. Casey pranced around the yard, tossing the paper up in the air and very proud of himself.

It wasn’t all cotton candy and unicorns. He had a strong storm anxiety and on one occasion managed to eat the better part of two couches and a down comforter.  That doesn’t even count the numerous rainy nights we were kept awake by his whimpering and pawing.  And the last year or so hasn’t been easy.

All in all, though, he was a great member of our family for just over 12 years and we will miss him.