I think I started shaving when I was around 13 years old. I’ve always had a fairly heavy beard. It wasn’t as bad as my brother, who (legend has it) began shaving before he was potty trained. For many years, this was a torturous experience. I was always nicking myself. My neck, especially, was usually raw from the nicks, cuts and razor rash.

Then in the mid-1980s, my face found a savior in the form of a professional makeup artist. I was presenting on a live regional Emmy Award broadcast, and the producers had hired a makeup artist to make sure everyone looked their best under the lights. I think I had a particularly rough shaving session that afternoon. He looked at my razor-burned and nicked neck and asked me what kind of shaving cream I used. I don’t remember the brand, but I was probably using a cream or a gel at the time. He told me:

“Poolman, what you need to do us just go and get an old-fashioned shaving brush and a cake of shaving soap. That should take care of about 90 percent of your shaving problems.” 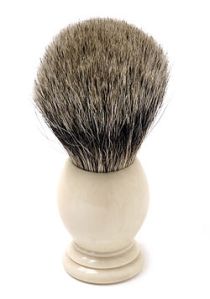 I went out the next day and bought a mug, a brush and a cake of shaving soap. I began using them that weekend and never looked back. It has been 30 years and during that time, I have “nicked” myself maybe a handful of times a year, and those were usually occasions when I was trying to stretch a little extra life out of a dull blade. I use a shaving gel from an aerosol can when I travel, simply because the mug-brush-soap doesn’t pack easily. When I’m back at home, it’s back to the shaving mug and brush.

I have been an evangelist to any guy who would listen on the benefits of the shaving brush. It’s smooth; it’s efficient; and it’s cheap. A bar of shaving soap costs around a dollar and lasts for a couple of months.

Despite it being the “best” way to shave, apparently the technique hasn’t caught on very well. Several months ago, I went to the both CVS and Walgreens to find a replacement cake of soap, and neither store had it in stock. I ended up ordering a case of a dozen from an on-line vendor. Then, earlier this week, my shaving brush broke. (The stress incurred when lathering the brush in the mug eventually cracks and breaks the handle from the piece holding the bristles.) No big deal. So you buy a new brush for $6.00 every couple of years.

If you can find one.

I went back to CVS and Walgreens, but no joy. So back on-line I went, and spent some money that I would have preferred to keep local. This is really sad. Not only is the shaving mug and brush a long standing masculine tradition, but it’s actually the best way to protect your face during a shave. It is both better and less expensive than the myriad of creams and gels that are available. The stores shouldn’t be discontinuing those products; they should be promoting them. Whatever are they thinking?