In defense of evil…sort of… 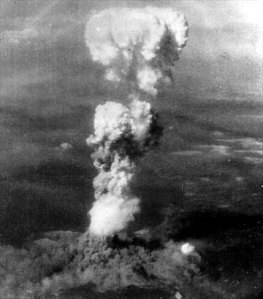 A couple of recent developments have caused me to rethink the popular notion that no good can come from evil.

I am judging entries for a local film festival. The subject of one video I watched last week profiled a survivor of the atomic bombing of Hiroshima. Naturally, it was very sympathetic towards him and the Japanese of August 1945. It gave me something to think about, but probably not in the direction the film maker intended.

I am no historian, but I read a lot. Over the course of the past year or two I have read several history books on the final months of World War II, including  Downfall: The End of the Imperial Japanese Empire by Richard Frank; Retribution by Max Hastings; and Whirlwind: The Air War Against Japan, 1942-1945 by Barrett Tillman.

It seems easy in the light of the 21st century to cast the US as a malevolent nuclear monster and the Japanese as innocent victims in the atomic bombings. This is a popular view to some, but such casting ignores the realities of 1945.

The Japanese initiated a war of conquest that they waged with incredible brutality against both the military and the civilian populations of their foes.

By the summer of 1945, the Japanese government was dominated by die-hard militarists who were quite willing to sacrifice both their country’s military forces and civilian population “for the honor of the Emperor,” rather than admit the obvious fact that that they were defeated.  They were willing to die to the last man, woman and child.

It is quite unrealistic to believe the Allied Powers would simply walk away after having driven Japan to the brink of defeat. So, aside from nuclear bombardment, there were only two other options available to the Allies.

1.) A continuation of the campaign of fire-bombing and naval blockade, which had already destroyed most Japanese cities and much of  Japanese economy, and killed hundreds of thousands. A continuation of this campaign would have undoubtedly resulted in the deaths of millions of Japanese by either starvation or incineration.

2.) Invasion – In addition to the deaths and wounding of more than (estimated) 100,000 American and British soldiers, sailors and Marines, an invasion would have likely resulted in the deaths of more than a million Japanese, military and civilians.

In light of these options, the deaths of roughly 200,000 Japanese in the two nuclear bombings seem mild by comparison. As horrible as the nuclear bombings were, ultimately they were the least of the possible evils, not just to the Allied servicemen, but also to the Japanese. The callous conclusion is this; there are millions of Japanese who are alive today because the war ended when it did and their parents or grandparents were not killed by additional bombing, blockade or invasion. The misfortune of the residents of Hiroshima and Nagasaki became their good fortune.

On a similar note, but closer to home, the fortunes of millions of African Americans living today were benefited by the tragedy that was impressed on their ancestors. By 21st century values, there is no debate about the evil of slavery in this country. The capture, transport and forced enslavement of Africans and their descendents in America was a tragic evil imposed on those who experienced it.  However, seven generations later, the descendents of those American slaves benefit greatly from the misery to which their ancestors were subjected. If it were not for their ancestors being forcibly brought to this country, it likely most of the African Americans of today would have been born in equatorial Africa. S0, instead of living in a land rampant with civil war, poverty and disease, the descendents of American slaves are born in a country with perhaps the highest standard of living and the greatest total opportunities in history.

I’m sure that is not what the plantation owners and slave traders intended, but it’s amazing how things sometimes turn out.

Some things to think about

I saw two items in the news today that prompted some reaction.

The first was a truly tragic story from the Rio Grande Valley of Texas. It seems a woman took some pills to abort her 7 month gestation child. The story raised attention  because, being unable to flush the baby down the toilet, the woman and the father put the baby in a gift box, wrapped it and put it under their Christmas tree. You can check the details here.

Actually, my comment is not about the mother and the father. Clearly, they are seriously disturbed and need psychiatric help. My issue is with the AP and other news sources that consistently referred to the result of the botched effort at a premature delivery as a “fetus.” Supposedly the woman was in her 7th month. That’s 32 weeks, give or take some.

It happens I am very close with a neonatal intensive care nurse. She cares for premature babies every day. She assures me that at 32 weeks, an unborn child is fully formed and typically would weigh in at 2-3 pounds. If born prematurely, the baby would need special care, but barring other complications, a 32 week gestation baby stands an excellent chance of a good outcome.

Memo to the Associated Press and other journalists – That was not a fetus. It was a baby. Get it right. Words matter. You should know that. They are the tools of your trade.

Meanwhile in Copenhagen, the nations of Africa have been staging a protest at the global warming conference to push the industrialized nations to cough up some big bucks to pay for the effects of climate change on the third world.

In principal, I don’t have a real problem with this. My issue is with the governments that would be getting the money. Here is a quiz. How many African nations can you name that have a stable, democratic government?

There are a few, but they are greatly outweighed by the countries still ruled by dictators, wracked by civil war or who consider 5 years of peace and stability a new record.

Here are just a few examples:

Zimbabwe – President Robert Mugabe has single handedly destroyed what once was a fairly thriving country. The economy is in shambles and life expectancy has dropped into the 30s for both men and women.

Democratic Republic of the Congo –  The site of 12 years of civil war. Fatalities continue at the rate of  45 K deaths per month.

Nigeria —Plagued by ethnic violence. Run by a military dictatorship for three decades ending in 1999.

Ivory Coast – Has been plagued by a succession of  wracked by coups and civil wars for decades.

Somalia – Now, there is a poster child for a emerging nation.

Liberia – Two civil wars in the past 20 years.

Rwanda – Known the world over for the massacres that happened there in the 1990s.

What would make anyone think that billions of dollars sent to the people who actually rule most African nations would be used to fight the effects of climate change?

You would be better off trying to help your homeless, alcoholic uncle by giving him an unlimited credit card.

We had a fairly quiet weekend, which was just great. I slept late on Saturday and then spent most of the rest of the day running errands on the far side of town. Saturday evening mass and then off to eat some seafood at a casual beach restaurant with two other couples. Sunday was spent cleaning up the yard and the pool, doing laundry and other equally exciting chores. We have such an interesting life.

As the summer winds down in this part of the country, there is a mix of emotions. You hate the see the summer end, but on the other hand the college football season is right around the corner. Around here, that is about as exciting as Christmas is to a small child.

Here on the coast, there is another issue that raises its head this time of year – hurricane season. Every day, people who for the rest of the year, are only casually interested in the weather make sure they check in on the Weather Channel or Weather Underground every day. Although they are thousands of miles away, cloud formations off the west coast of Africa are the topic of conversations in the aisles of the grocery stores. There is a little edge — a little anxiety — that sticks with you all the time.

When a storm actually does hit somewhere else, you have mixed emotions. “Gee, I’m really sorry you were hit by a hurricane, but I’m even happier it didn’t hit me!

It’s been ten years since Hurricane Floyd threatened this part of the coast before making one of those famous right hand turns and heading north to North Carolina.  The evacuation is legendary among Savannahians. It is fortunate we weren’t hit by a major storm in the ensuing couple of years. I know many people, Mrs. Poolman included, who said, “I’d rather sit here and suffer through a hurricane than spend another 23 hours stuck on the road to Atlanta.”

There is a local myth that Savannah is protected from hurricanes by the curvature of the coast. There is actually a little truth to the legend, but it certainly isn’t a bullet-proof shield. The rotation of the Earth tends to make hurricanes curve to the right (north.) They also feed off of warm water, and the north-flowing Gulf Stream runs about 100 miles off shore here. Both of those will give a storm a tendency to turn to the north, but they are only two of lots of other factors, most of which  I do not understand.

So as of this evening, we have a tropical storm in the Gulf that appears to be heading for Alabama, and another out in the Atlantic, heading who-knows-where.

I guess I’ll be joining everyone else watching the Weather Channel for the next two and a half months.