It hasn’t been the most exciting week, but here are a few updates. 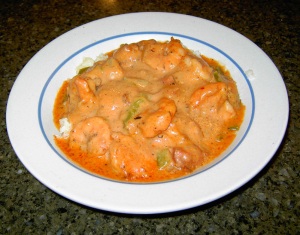 Being a “born and raised” Yankee, this is a dish that I should not be inclined to like. When I first heard about it, I thought it sounded disgusting.  At the time, I could tolerate grits, but wasn’t real excited about them. And shrimp in some sort of gravy on top of them just sounded gross.

Oh my, has my mind been changed. I had them a year or two ago at a restaurant and fell in love. Mrs. P’s dish is even better. She sauted the shrimp with some blackening spice and then made a spicy creamy sauce to go with it. The leftovers are dinner again tonight. As soon as I can get Mrs. P to write down the recipe, I’ll post it.

Our barrier island boony stomping expedition last week produced fruit today. Reporter Mary Landers wrote a nice article on the project and her editors put it on the front page of the Savannah Morning News. If you are interested, you can see it here.

Mrs. P and I are both off work through the weekend. No CCD class tomorrow night, so we’ll just be kicking back until heading down to Gainesville for the Gator season finale on Saturday.

We are staying home for Thanksgiving. We’ve managed to juggle schedules so that both our kids (Poolboy and Writer Princess), Son-in-Law and Poolboy’s GF will be able to join us for dinner. Some of our good friends, the W’s will also be here. Like us, they have no family in town, so we almost always do our holidays together.

We also keep an eye out for holiday “widows and orphans,” a practice Mrs. P and I have done since the early days of our marriage when we were moving around the country and never had family close. I know one nurse from Mrs P’s unit will be here. We might pick up another widow or orphan before it’s over.

Saturday’s Florida-FSU game should be a good one. FSU is a traditional rival. Also, it’s Senior Day, which means it’s the last home game for Tim Tebow and a pretty great group of seniors. When they introduce Tim T, the applause may register on the Richter Scale.

And finally, Gator fans can breath easy. Urban Meyer put the issue to rest; he is not going to leave UF to go to Notre Dame. I never thought he would, but the rumor persisted. He’s got a great thing going where he is. The grass isn’t always greener. As a matter of fact, in February in Indiana, it isn’t green at all. Ha!

We have much for which to give thanks. Life is great!

We had an interesting day today. It started off with a meeting with our county legislative delegation. My boss was the main speaker, but I went along to carry his spear. We aren’t looking for anything special from the legislature in the session that will begin in January, but we need to hold on to the funding we have. Mostly we were there just to keep us on their radar screen.

After that, I spent the rest of the day out on the water and hiking around a couple of the local inner barrier islands.

It was a very nice day!

The project is a joint effort between our institute and the state DNR archaeology division.  We are trying to identify significant archaeological sites that may be threatened by erosion in the foreseeable future. A reporter from the Savannah newspaper went along to do a story. I joined the group to liaison with her and to take pictures for her. Not a bad way to spend a fall Friday.

It was a beautiful day, with temperatures ranging from the low 70s to the low 80s. Nice break from the office. As Mrs. Poolman said, “And you get paid for that?” 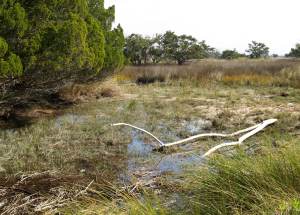 We saw some nature and a couple of pretty cool archaeological sites, including a Civil War era earthen artillery battery and a 19th century bricked walled grave yard.

It’s weird seeing something like that on an otherwise deserted island.

I am not the most coordinated person in the world, which I demonstrated once again. As we were walking along, we came to a fallen tree across our path. Holding on to my camera, I straddled the log, sitting on it. The log was on a slant, with the downhill side to my back. Before I could swing my trailing leg over and hop off the other side, I felt myself falling backwards. Sure enough – down I went. It was like, well, falling off a log. I had dirt and leaves in my hair, but no damage except to my dignity. I fall a lot, and have gotten pretty good at it.

We did see a little wildlife. I was standing and talking with the reporter, when I saw feral hog. It was a mama with about ten little piglets. Mama was fairly large, about the size of my Labrador retriever. She heavily engaged snuffling around looking for food or whatever they do and didn’t notice us until she was about 40 feet away. I raised my arm to try to get a picture and that caught her attention. You could just see what went through her little porcine brain.

Off she went, running all the way home. We didn’t hear her, but she must have sent a message for the little pigs, because they also scurried after her.”

All together, it was a good day.

Mrs. Poolman and I are having an early dinner (Spare ribs. How appropriate?) and to bed early. The Gators have an “exhibition game” tomorrow against Florida International. Mrs. P is staying home, so I’m taking two of my Gator-fan friends to the game. We’ll be out the door at 5 am. That’s criminal for a Saturday morning, but you gotta do what you gotta do.”