This was a busy day. Monday is day three on our four-day museum passes. Tomorrow, we are headed to Versailles, so today was the last chance to hit some of the paid-admission attractions by using our passes.

We started the day by riding the Metro half way up the Champs Elysees and then strolling the rest of the way to the Arc de Triomphe.  We took the elevator to the top, where the view was very nice. We have been blessed with sunny weather ever since the third day here.

Back down the Champs Elysees and the Metro and a breeze-through visit to the l’Orangerie museum. This is a relatively small art museum, but is packed with Monet’s Water Lilies and a bunch of paintings from other impressionists, like Renoir, Modigliani, Cezanne and Picasso. Mrs P wasn’t so sure about this stop. But afterwards she said “That was really cool!” Chalk up one win for the Poolman!

Back on the Metro. Next stop, Ile de la Cite. We wanted to visit the archaeological crypt at Notre Dame but it was closed on Monday. Our next planned visit was to be the chuch of Sainte Chapelle. However the line was around the block and wasn’t moving.

We got some sandwiches and pastries from a walk-up lunch stand and took the food to some benches along the Seine. Lovely scene. Lovely weather. Even the begger-pigeons contributed to the ambience. Not too shabby. Pics below.

After lunch, we hiked through the Latin Quarter to the Pantheon. I was not overwhelmed, but BIL really wanted to see Foucault’s pendulum. It was pretty cool.

The best part for me was the church next door, St Etienne du Mont. The steps on the side of this church was where a key scene in one of my favorite movies, Midnight in Paris, was shot. Owen Wilson’s icharacter, Gil Pender, is reclining on those steps at midnight when a 1920s era cab picks him up and carries him back to the 1920s where he meets F Scott and Zelda Fitzgerald, Picasso, Hemmington, Dali and a bunch of other characters. I waited on the steps but no one came to pick me up. Of course, that was four in the afternoon, not midnight. Maybe I should go back later.

After that a stop at Monop for supplies and back to the apartment for the night. 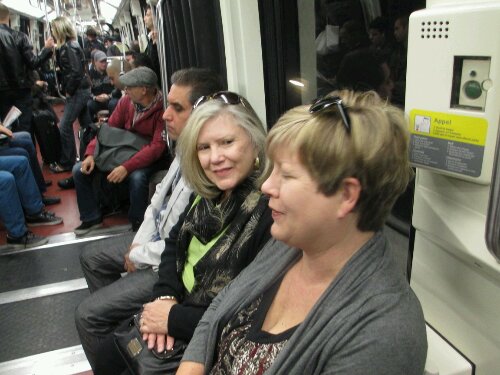 We have logged a lot of trips on the Metro. 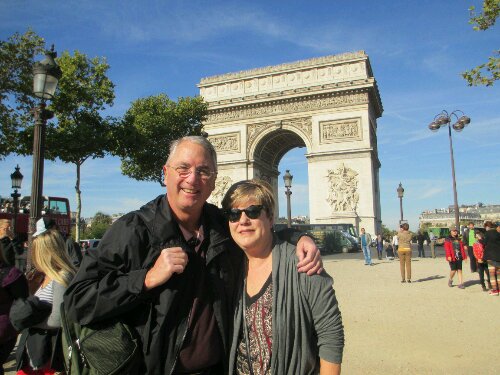 Mrs P and me on the Champs Elysees

The view from the top

Our merry band back on the ground

The sisters near Musee de l'Orangerie

Picnicing by the Seine

The none-too-shabby view from our picnic bench.

Back up at street level. 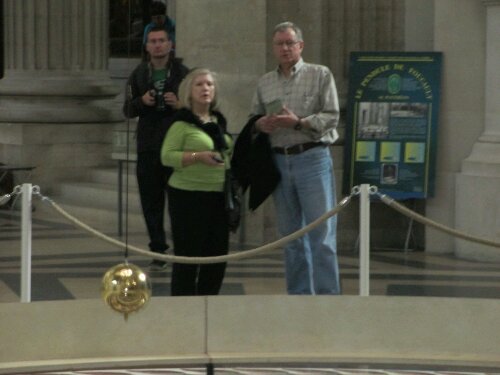 BIL and SIL watching the pendulum. 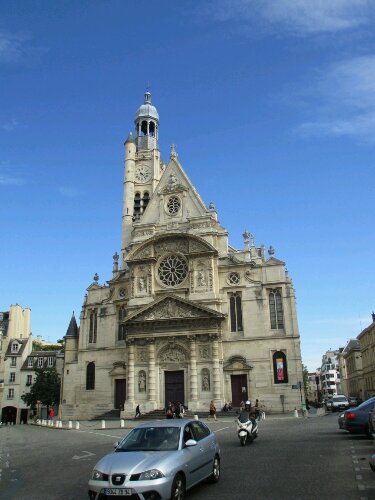