Thanks to my wonderful dogs — not!

My hat goes off to all those people who work construction during the summer. I was out in the sun for several hours today, repairing the gate on our wooden privacy fence. The heat just about knocked me out. I am definitely glad I don’t have to do that every day.

The repair work was needed because of our escape-artist dogs, especially the little one, Sammie. 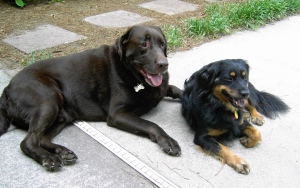 Actually Sammie doesn’t have the size to do all the work herself. I think she enlists her big brother, Casey, but there is little doubt that Sammie is the brains behind the caper. Casey does not have the initiative to plan something like this on his own.

My previous work has foiled their efforts to escape to the outside world. They have been concentrating on the double gate in our back yard privacy fence. I stopped them from being able to dig under it. Instead they have been working like little beavers – literally – and have tried to chew their way through the gate. This is the result. 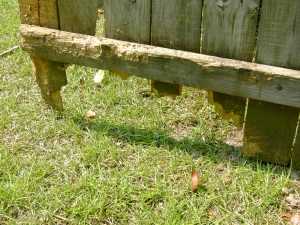 When you have dogs who think they are beavers

Before you start feeling too sorry for the mutts, please understand they are not closely confined. They have the run of a very large backyard, lots of shade and water, and access to the garage through a pet door. Aside from the fact they don’t have air conditioning, they don’t have it very tough. The alternative would be to keep them crated in the house for ten and a half hours a day, and I suspect they wouldn’t like that very much either. They are relegated to the yard only the three days a week that Mrs. Poolman works. Otherwise they are house-dogs, spoiled brat house-dogs at that.

So I spent about $60 at Home Depot on supplies and four hours in the hot sun today, replacing the chewed boards. The tough and time consuming part were the two boards on either side of the gate opening that hold the hardware.  It probably shouldn’t have taken that long, if I actually was good at doing this kind of thing. Plus, I had to take breaks to cool-off myself, and many of the tools that simply became too hot to handle when left in the sun. 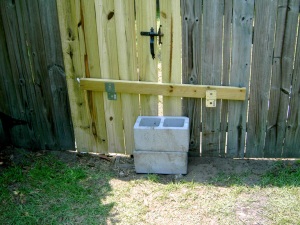 I topped it off with my own touch, a pair of brackets and a 2×4 holding the gate shut from the outside. 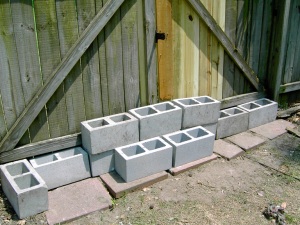 I stacked concrete blocks on the inside to deny them access to the gate. They have been able to move the blocks in the past, but maybe two rows both vertically and horizontally will help thwart their escape attempts.

I spent the rest of the afternoon floating in the pool and relaxing on the patio. It was a rest well earned, thank you very much.