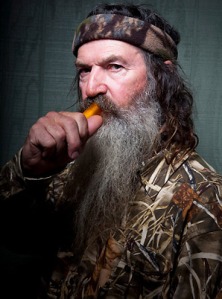 I didn’t exactly stay glued to my computer or TV to keep track of the minute-to-minute developments over Duck Dynasty patriarch Phil Robertson’s comments in GQ, but it has been an amusing holiday diversion. Some thoughts…

I’m not sure why anyone was so shocked. His comments on gay sex and gay marriage are certainly out of vogue with popular culture these days. However, they do reflect a stance that was considered conventional wisdom until just the very recent past. Let us remember, the idea of gay marriage was a fringe concept until just the last few years.

Some complained about the loss of “freedom of speech” and cited the First Amendment without having a clue what the concept entails. As it relates to a case like this, the Freedom of Speech clause in the First Amendment protects a person’s right to state his opinion. It offers no protection against the reaction to those comments. I can call those people morons all I want, but I should be prepared for a negative response.

If your fame and fortune rests on your intangible image in popular culture, then you really should be very careful about protecting that image. The same thing happened with our neighbor Paula Deen.

When you develop a vaccine to prevent breast cancer, you can rest on your accomplishment and say anything you want. Your spot in history is still reserved by your accomplishments. However, when you have no tangible foundation, your public image is like a filled balloon. Everything is fine until someone comes along with a pin. I think this applies only partially to Phil, because I’m not sure he really cares one way or the other. Remember, this is a guy who gave up on a potential NFL career because the season interfered with hunting season. If Duck Dynasty were to go away, he still has the duck call business that got the whole thing started.

It is no surprise that A&E kissed and made up. Let’s face it, DD is the only thing that makes A&E stand out in a field of second-tier cable networks. Think about it. Without DD, what is A&E?

It’s that network that runs “Law and Order” marathons. No, that’s TNT.

How about the network that runs old movies. No, that’s AMC.

Wait! It’s the network that runs those syrupy melodramas for women. No, that’s Lifetime.

I know. It’s the network that shows people how to fix up and sell their home. No, that HGTV. (Mrs. Poolman’s favorite channel, by the way.)

Get the picture? A&E sure did.

For the second week in a row, we were hit with an awkward question during last night’s 5th grade CCD class. We had been covering the Sacrament of Matrimony. My co-teacher, Sherry, said she was anticipating and absolutely dreading a question about gay marriage, but that never materialized. Instead, the question originated in a passage in our text.

“The deacon or priest asks the couple three important questions…Will they lovingly accept children from God and raise them in the faith?”

“So Mr. Poolman, suppose it’s not a good time for a couple to have children? Like maybe one of them is in the military and is being sent away. What can they do then?”

I stammered and stuttered, and looked over at Sherry for help. She signaled that I was definitely on my own for this one. Thanks for the help!

There are two problems in trying to answer that question.

1. As I mentioned in a post last week, the students are 10 and 11 years old. We’re not sure what they have been taught about sex by their parents. I really don’t want to open things up to additional questions like, “Mr. Poolman, what’s a condom?”

2. And that is because we do not have a mandate or permission from the students’ parents to get into a discussion of sex. Personally, it wouldn’t bother me to have such a discussion, but absolutely not without the parents’ involvement.

So after thinking about it for a moment, I answered that the Church does not approve of artificial means of birth control, but there are other, natural means a couple can use. And then I said that we really don’t have permission from their parents to get involved any more deeply in that kind of subject, and strongly suggested that they talk with their parents.

It probably wasn’t the best answer, but it was the best I could come up with on short notice.

Fortunately, there were no additional questions on that subject. Whooo!

We are going to discuss the Ten Commandments for the next two weeks, so we should be safe. Oh, wait! They do include that adultery thing, and coveting your neighbor’s wife. Maybe I’m not out of the woods yet.

Wedding bells for Bert and Ernie?

When I first heard about this idea, I thought it was a joke, and actually, when you step back and take a good look, it probably is. None the less, there is a group out there circulating a petition to have Bert and Ernie from Sesame Street declared gay and have them get married. 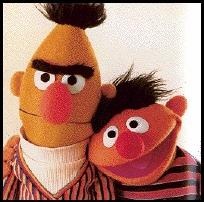 I look forward to ideas like this because it gives me the opportunity to laugh and make fun of people. (Hey people, they are PUPPETS!) Fortunately, I think the chance of this actually happening is pretty close to zero.

On the more serious side, here is one good reason this is a really bad idea. Sesame Street is a television program aimed at pre-school children. When I was that age, all I knew about the differences between boys and girls was that boys had short hair and wore pants, while girls had long hair and wore dresses. When my sisters were born, I discovered anatomical differences. However, aside from going to the bathroom, I had no idea of their uses. Maybe I had a stunted childhood but I suspect my view of the world as a three- or four-year old wasn’t unique.

So why would you want to inject sexuality into a program aimed at very young children? I’ve already expressed my disgust over the amount of sexual content in mainstream television that airs in the early evening. What parent wants to discuss the concepts of homosexuality or gay marriage with a four year old?

This is a bad idea, but hey, LGBTQ folks, you keep on trying. Laughter is good for the soul.

Take the fuss out of same-sex marriage

The issue of same-sex marriages is back in the news, as the “Defense of Marriage Act” is under attack once again.

More than a year ago, I wrote about a solution. Check it out here.

A solution to the same-sex marriage debate

The issue of same-sex marriage is back on the front burner this week, courtesy of a Federal judge’s ruling this week that struck down California’s Proposition 8, which would have outlawed the practice, at least in California.

There was an interesting column on The Huffington Post today with a reasonable solution — get government out of the marriage business.

Gee, I wish I had thought of that. Oops, maybe I did.