A friend of mine posted this poster card on Facebook. As much as I hate to admit it, that’s a pretty good fit for me. 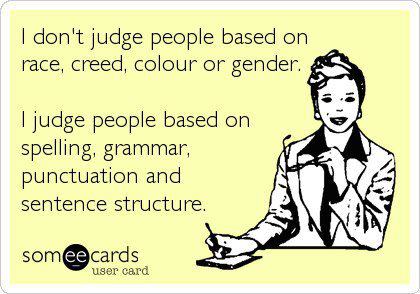 I spent most of my adult career in TV news, where writing was important, but traditional grammar rules were loosely observed. Punctuation was never a consideration. Ellipses were frequently used by many writers…

Then I went to work in higher-education public relations, and the AP Stylebook became my Bible. That’s not to say that I adhere to it perfectly. All you have to do is read this blog to know that I stumble frequently. (One major fault is I have a very difficult time editing anything I wrote. I just see what I meant to say, not what was actually written.)

I must confess to another serious geek-trait. I took two years of Latin in high school. I didn’t like it. Actually, I hated it. I still can’t explain an “ablative absolute. However, those two years of declining verbs and learning to use five cases of nouns helped me write English better than any English class I ever took.

So for 2013, perhaps this card will be my resolution – to remind me to pay closer attention to how I write. I’d hate to be on the wrong end of my own judgmental nature.