I made breakfast sandwiches for Mrs. Poolman and myself this morning. We call them “Westerns” for a reason I cannot remember. These used to be a favorite late-night snack for my brother and me when we were still living at home in high school and college. I haven’t made them very often since then. I don’t know why. 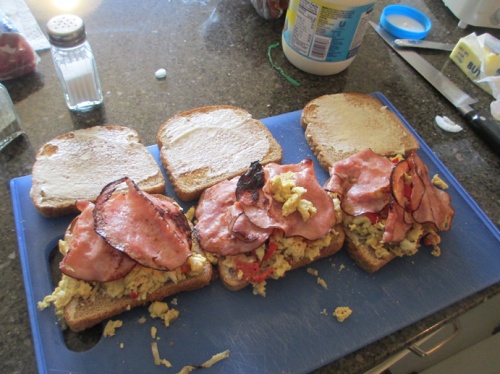 The “Western Sandwiches” are a little messy.

–Saute some chopped onion and sweet pepper (green, red or both.) Scramble eggs into the veggie mixture.

–Fry some deli-style ham. We used to use “chipped ham,” but that is tough to get outside of Pittsburgh.

–Slather a little mayonaise onto toast and pile on the eggs and ham.

It’s not very healthy, but it is very good. Yum!

How can something that looks so bad, taste so good?

There is one additional thing I did on my MLK holiday this week. I made a pot of black bean soup. As is the case with many things in our family, black bean soup has a story behind it. (Not necessarily an interesting story, but a story all the same.) 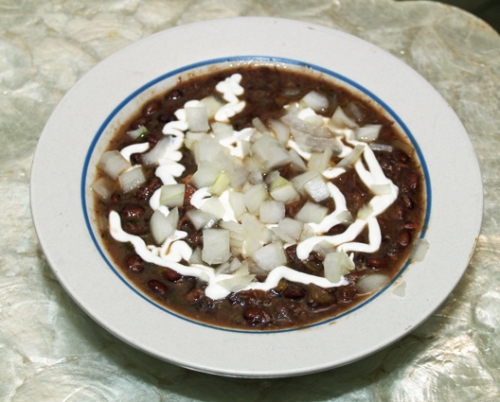 Having grown up in a very meat-and- potatoes family, I don’t think I had ever heard of black bean soup until I had graduated from college. The summer after I graduated, I was working a summer-replacement job for a radio station in Vero Beach, Florida. (WTTB-AM “Where The Tropics Begin”) I spent most of the weekends that summer driving to visit my then-girlfriend, either in Gainesville or at her parents’ house in Clewiston. But on one particular weekend, I was stuck in Vero without much to do. The GM of the station, Pat Hazel (a really great guy) invited me to share Sunday dinner with his family.

“My wife is going to make her fabulous black bean soup!”

I didn’t know what to expect, but it didn’t sound particularly appetizing to my rather naïve and inexperienced palate. Of course, I went to dinner anyway and had a great time. Pat and his family were warm, engaging people and they made me feel very welcome. And I loved the soup.

In the late 1980s black bean soup started to show up on restaurant menus, and I was reminded of that evening. I thought I would give it a try myself. I investigated and tried several recipes and settled on the one below. Once they overcame the initial problem that the soup doesn’t look very appetizing, even my children started to like it.

One step is to puree some of the soup in a blender and then return it to the pot to thicken the soup. One time I used a long ice-tea spoon to stir it around in the blender, but it accidentally came in contact with the blender blade. I never knew that black bean soup could be explosive.  There was puree’d black bean soup all over the white kitchen cabinets, the ceiling and me. It took hours to clean up that mess.

Here is the recipe.

Here’s what you need.

*Before you do anything with the beans, put them in a bowl, sort through them with your hands and pick out any stones.  Yeah, that’s right, stones, like the kind you find on the ground. Occasionally you will find them. Most beans were harvested in third-world countries and their processing isn’t the most sophisticated. You definitely want to catch these before cooking. Nothing will ruin a good meal faster than having someone unsuspectingly bite down on a rock. Once they are “clean,” use your colander to rinse them well under running water.

First thing you have to soften the beans. There are two ways to do that. The first is to soak them in a bowl overnight. The other is to put them in boiling water and simmer them for about 10 minutes and then let them sit for an hour. In either case, you should drain the beans through a colander before cooking. Do NOT cook them in their soaking water.  The major issue with beans is the gaseous by-product that comes several hours after eating. Draining them before cooking with reduce that significantly.

Once your beans are soft, put them, the ham, the onions, celery, spices and bay leaf all into a pot with a couple of quarts of water. You should have so much onion and celery that it should look like they are the dominant ingredients. Bring it to a boil, then reduce to a simmer and allow it to cook for at least an hour, maybe more. The more you cook it, the more everything will meld together, which is what you want.

Note: Keep a close eye when it starts to thicken that you don’t allow it to scorch on the bottom. Stir frequently and adjust your heat as needed.

When the soup is almost done, take about a cup or two of the bean mixture and put it in your blender. Whip the beans into a thick paste and stir it back into the mix.  This should thicken the broth and give it a creamier texture.

Serve with chopped onions and a dollop of sour cream.

A hint: Most ham bones are extremely fatty. So I usually cook the ham bone by simmering it for an hour or two the day before I plan on cooking the soup. Refrigerate it overnight and much of the fat will congeal on top of the water. You can spoon it off and throw it out. It will reduce the fat-content of the soup significantly, without affecting the great taste.

After a very busy last couple of weeks and two very busy weekends, I was ready for a a “nothing weekend.” It felt great!

I slept late and then ran a few errands on Saturday. I “read” at 5:30 Mass and then Mrs. Poolman and I enjoyed an early Valentine’s Day dinner at a local seafood restaurant that is part of the Paula Deen empire. Got home early and watched the Gators squeak one out against the UT Volunteers in a basketball game I recorded while we were out.

On Sunday, we just hung out around the house and took care of some of the usual weekend chores. I fixed Mrs. P a bacon ‘n egg scramble for brunch. Then I went to work on a ham & navy bean soup for eating sometime later in the week. (The recipe is under the tab at the top of the page.)

We had a house full of company two weeks ago, and we had picked up a spiral-cut ham from Sam’s Club for sandwiches, etc. One of the best parts of any ham comes when most of the meat is gone and you just have scraps of meat left on the bone. I have a navy bean and black bean soup recipes that work pretty well – or at least Mrs. P thinks so, and that counts big.

Actually, I started the process on Saturday. I usually boil the meaty ham bone the day before I really want to prepare the soup, and leave it in the refrigerator over night. That way the fat congeals on the surface and can remove it before adding the remaining ingredients.

I finished it off on Sunday afternoon. Mrs. P was so excited she put aside her plans to make chicken marsala for dinner (Or she just didn’t want to mess with it.) and we had the soup for dinner.

We watched some of the Grammies after dinner, and I was reminded how totally out of touch I am with the current music scene. Aside from the old timers, like Bob Dylan, I had barely even heard of most of the nominated artists, let along actually been able to name one of their songs. If I ever make it onto Jeopardy, “Current Pop Music” will not be my strong category.