A work weekend at Casa Poolman

This was a work weekend around Casa Poolman. It seems like every weekend for the past several weeks, Mrs. Poolman and I have determined that we would get a few things done around the house. And every weekend, we allow ourselves to be distracted for all or part of our planned work-time. (Funny how that happens.)   This weekend, I took Friday off so there would be no question we would be working. Here was the “to-do” list, and how successful we were.

We didn’t get it all done, but I’m feeling pretty good. (By the way, I love making lists. The only thing I like more is to cross things off.)

This is what the patio area of the back yard looks like to start the summer season.

The back yard at Casa Poolman

In addition, I removed the pool cover (86 degrees as of this morning) and vacuumed, backwashed, and adjusted chemicals. I also updated the check book and paid couple of bills.

And let’s not forget out multiple trips to Ace Hardware for more mulch.

In the past, I have described my less-than-successful efforts to grow tomatoes and other veggies. Since we clearly do not learn from past experience, we are trying again this year. We bought a pre-fab raised bed kit at Home Depot to create our little 4 ft x 4 ft effort at agriculture. It contains several bags of potting and planting soil, three tomato plants and two pepper plants, and a little cinaltro. (Total outlay to date — approximately $1.5 million.)

I have it placed where it gets a lot of sun, but is shaded in the very late afternoon. I really hope we get some produce out of it this year. I’ll keep you informed.

This has been a good weekend – relaxing and enjoyable, if not overly productive.

Both our children and their spouse/girl friend came over Christmas afternoon and we cooked a major holiday meal – turkey, dressing, gravy, mashed potatoes, peas, squash casserole, cranberry sauce, fresh green beans, and more. We really cooked too much, but both kids took large amounts of leftovers home with them. They won’t need to cook until they just get tired of turkey.

I spent most of Saturday bringing my home computer back from the dead. I restored it to its original factory condition and then reinstalled software, files etc, with several comprehensive anti-malware scans along the way. I encountered no bugs, but it did take awhile.

Saturday evening, we went down to our friends/neighbors, the W’s, for a holiday open house. They had all three of their children home at the same time, which is unusual, so they decided to have a party. Very nice. We came home and hit bed early.

I had the best of intentions of getting up on Sunday and starting to work on my part of our bedroom. We want to do a major clean-out and paint the room. When that is complete, we will replace the carpet there and in the other bedrooms with hardwood or laminate flooring. It will match the rest of the house. Well, I slept late; made some ham and eggs for Mrs. P’s brunch and then got back on the computer-update project. Mrs. P slaved away at her share of the bedroom project and we had a car load of stuff to take to Goodwill. 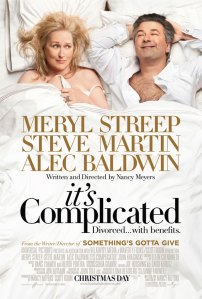 We decided to hit a Sunday afternoon movie. We saw “It’s Complicated” with Meryl Streep and Alex Baldwin. It was a very good movie –not an Academy Award winner, but a well written and well acted romantic comedy. Meryl Streep was good, but Alex Baldwin was off the chart. The plot is basically that Meryl and Alex are couple divorced for 10 years. They hook up at their son’s college graduation and begin an affair. Alex has remarried to a younger woman. You can imagine how it goes from there. Steve Martin is also their as the “third wheel,” an architect who is wooing Meryl.  It is a predictable path, but an enjoyable journey, all the same. Their three grown children are a little too saccharine for my taste, but that is the flick’s only real weak point. Don’t expect a complex plot, just enjoy Meryl and Alex doing their thing. If you are looking for a diversion over the holidays, it’s worth the price of admission and a box of popcorn.

We spent today running errands, to Goodwill, Home Depot for paint, etc.  Mrs. P is back to work for two days tomorrow so I’ll have no excuses not to get some work done.

We’re just hanging out this evening, watching Georgia play in the Independence (formerly known as the Poulan Weedeater) Bowl. Mrs. P has cooked a homemade turkey pot pie. If  it’s as good as it smells, I’ll post the recipe later.