The great thing about football season is you never run out of things to talk about. This week, Alabama coach Nick Saban and Florida coach Will Muschamp fired some shots at each other. Since Will is one of Nick’s protégés it makes it all the more interesting. Nick isn’t happy with the way the BCS bowls will be selected after the conference games. 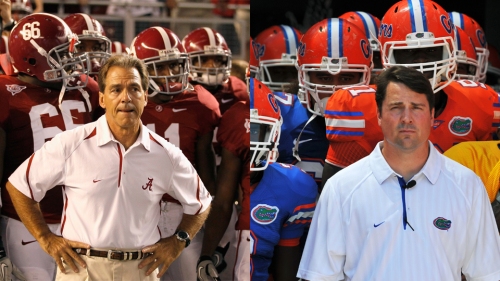 One of the unfair elements of the process is that those voting in the various polls tend to look at a team’s losses, not their wins. So this year, Alabama and Georgia both have one loss and will play for the conference championship. However, the loser of that game will have a second loss and almost definitely be ranked behind one-loss Florida in the BCS rankings.  Because they won’t play in the conference championship, Florida won’t have the “opportunity” to pick up that additional loss. That means Florida will probably get a BCS invitation, while the Alabama-Georgia loser will not.

“It’s not really a great scenario for either team. You play your way into the championship game, which means you’re the best team in your division. It doesn’t seem quite right. I don’t feel good about it for our football team or their football team.”

Actually, I agree. What’s interesting, however, is that Nick didn’t express that opinion last year when his Alabama team…

1.) Finished second to LSU in the Western Division and did not go to the championship game.

2.) Advanced to the #2 BCS ranking, when Georgia lost to LSU.

3.) Picked up the SEC’s second BCS invitation, to the national championship game.

4.) Won the national championship even though they did not win their division or play in the conference championship.

I love a little hypocrisy.

By the way, Muschamp’s response – “I can switch and go to Atlanta if he doesn’t want to go to Atlanta and play the ‘Dogs. Be careful what you wish for Nick.”

Is young Will channeling a little Stevie Spurrier?

Meanwhile the discrepancy in the strengths of the conferences is creating some interesting situations.

Georgia Tech, with a 6-6 record, will play FSU in the ACC conference game this weekend. If they win, they get a bid for a BCS bowl, probably the Orange Bowl. Meanwhile, the Big East doesn’t have a single team in the top 25, but guess what conference does? The MAC! Right now, Kent (“Four dead in O-hi-o”) State could move into the top 16 with a win in their conference championship game.  The BCS rules state that a school not from a “guaranteed-bid” conference earns a spot in one of the BCS bowls if it finishes in the top 16, and is ahead of the top-ranked team from one of the “guaranteed-bid” conferences.

If you were running the Orange Bowl, how excited would you be to host a 7-6 Georgia Tech playing Kent State? (Sorry, son-in law.)  One columnist, Pat Dooley, from the Gainesville Sun, wrote he wouldn’t watch that game if were played in his backyard.