I have been totally uninspired to write for the past couple of weeks. We certainly have been busy, but it’s been all the normal, not-all-that-interesting stuff.

It’s been a disappointing college football season. Our Florida Gators have flip-flopped back and forth from looking like world-beaters (not very often) to impersonating Sister Mary’s School for the Deaf and Blind.  There is one game left, against rival Florida State. We’ll see who come to play.

The newest addition to the Poolman family, Penny the Kitten, is doing very well. It took her about a week to figure out the other members of our animal sub-culture were pretty harmless. (You can get stomped by a large dog, but it won’t be intentional.)  She and Sid the Tailless have become tight. 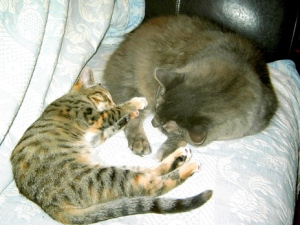 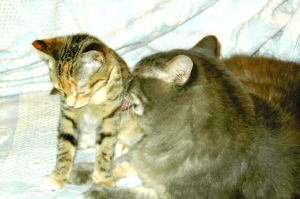 Sid gets in on a little grooming of his little sister.

She and Sammy, the younger, smaller dog, have hit it off big-time. They actively tease and play with each other, and Penny is holding her own just fine. Penny has actually gone up to a resting Sammy and curled up with her. I have tried to get a picture, but every time I start to point a camera at them, Sammy gets up and walks away. It’s like she is ashamed to be caught snuggling with a cat. Very weird.

Planning Thanksgiving has been a challenge this year. Mrs. Poolman is working Thanksgiving day, which means we won’t be eating the holiday meal until after 8 in the evening. You would think that would make it very easy to plan around our children, their in-laws, potential in-laws, etc., but you would be wrong. As of this afternoon, we got word that Writer Princess’s in-laws would not be coming. Her MIL is undergoing radiation treatment and doesn’t want to even leave the house. Quite understandable. WP and SIL will be heading out to their place early in the day and preparing a Thanksgiving meal there.

There are still a bunch of “maybes”. Poolboy’s girl friend’s parents are thinking about going to Disney World for the weekend. Maybe they will; maybe they won’t. Maybe GF will go along; maybe she won’t. As of this morning, we still weren’t sure whether to set places for five or 14.  Oh well. We’ll either have the right amount of food, or a ton of leftovers. Either way is OK.

These odd holiday schedules are nothing new for us. Mrs. P works either Thanksgiving or Christmas every year and alternates. I pretty much have the holiday meal preparation down to a science. I also get lots of help from others who prepare side dishes.

No CCD this week because of Thanksgiving. The break comes at a very good time.

Lots of great football this weekend — might as well enjoy it because the end is in sight.