(It’s Monday, and we are back in Savannah. For the first time in several days, I have a reliable internet link. Here is a posting from Friday. I’ll try to post the trip’s final days later this evening.)

In my entire life, I probably haven’t spent five minutes thinking about Luxembourg. Now I’ve spent the night there.

If I had thought about it, I probably would have envisioned Luxembourg as a set of bucolic, rural villages with lots of haystacks, ox-driven carts and buxom milkmaids in apron dresses. Not the case.

The view from our hotel window in Luxembourg City

Our hotel was right across the street from the train station.

Just getting the bus loaded with luggage and people was a challenge this morning.

Our only history-related stop today was at the Luxembourg American Cemetery.   It’s most famous resident is General George Patton. 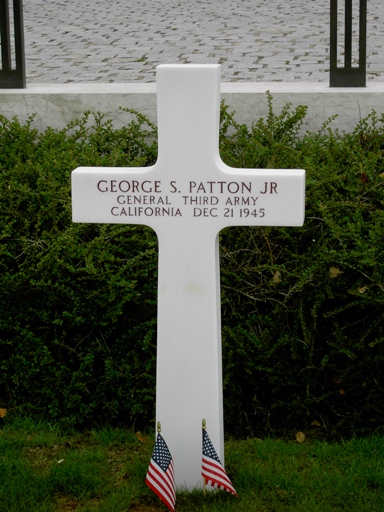 Then we got back on the bus for the long haul to Munich.

We arrived in Munich in the early evening. We got settled into our rooms and Dan, Birdie, Ron and I took off to the central part of the city. Our hotel is nice enough, but it looks like the neighborhood around it has gone downhill in recent years. 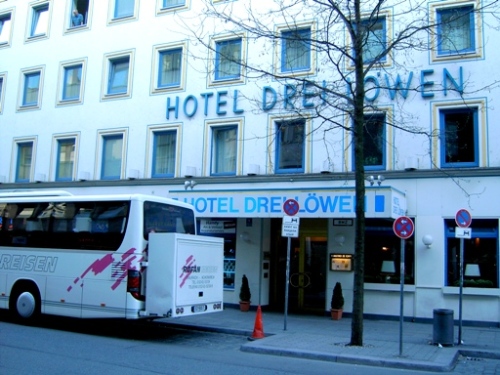 The Drei Lowen (Two Lions) Hotel in on Schillerstrasse in Munich

We are only a block or two from the main train station, but our hotel is surrounded by strip clubs and mid-eastern gold buyers/sellers. Not the kind of place you go walking alone at night.

Somewhat surprisingly, within a couple of blocks, we were out of the rough section and into a wide pedestrian mall leading to the Marienplatz at the center of town.

Munich's City Hall with a Glockenspiel. We did not see it perform.

We were all impressed with central Munich. The pedestrian malls, surrounded by historic buildings were great. Even after dinner, at around 1030 pm, it was hopping.

We did some final souvenir/gift shopping and headed to a beer hall recommended by the hotel desk clerk.

We had a good dinner. We all had the same thing – a sausage sampler with sauerkraut and mashed potatoes…and of course, beer.

We did have a little trouble with Birdie, who insisted in playing with his food and making “food sculptures.” It was sausage; use your imagination.

Tomorrow, we are off to Dachau and Berchtesgaden.

Walking in the foxholes

We got into the Novotel Hotel in Maastricht late last night — around 9:30 pm. Some of us scrambled for a bite to eat at the hotel bar. A mini-pizza was about the only choice, if you could get the attention of the frazzled and not-particularly eager barmaid. We had big lunch, so Dan and I said “screw it” and went to bed.

Today is another beautiful, sunny day in the Benelux countries, and by the time we are finished, we will see all three of them today. We started in the Netherlands; spent most of the day in Belgium; and will sleep tonight in Luxembourg.

One thing about this part of Europe is we can never be quite certain what language is being spoken. We started the day in Dutch, while in Bastogne, we encountered both French and German. None of us speak any of them worth a darn, so I guess it doesn’t really matter. Birdie has become an expert at dealing with waiters and shopkeepers by pointing and nodding.

This morning our first stop was the American Military Cemetary at Margraten, Netherlands. 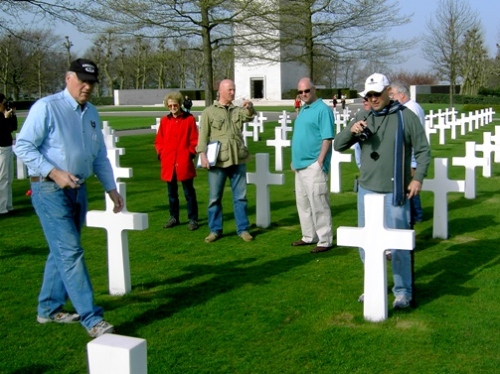 We spent around an hour there and then headed to Bastogne. Dan commented how impressed he has been with the darn-near-perfect condition of the cemeteries we visited. There isn’t a stray piece of grass to be seen.

Foy is not very large.

"The Gang" in Foy

Then we rode back towards Bastogne about a half mile to Bois Jacques (John’s Woods). This was the actual location of Easy Company during the Battle of the Bulge. We walked through the woods a few hundred yards to the exact position Easy Company occupied.

Dan in a foxhole.

We had one more sip of Birdie’s calavados brandy to commemorate the occasion. 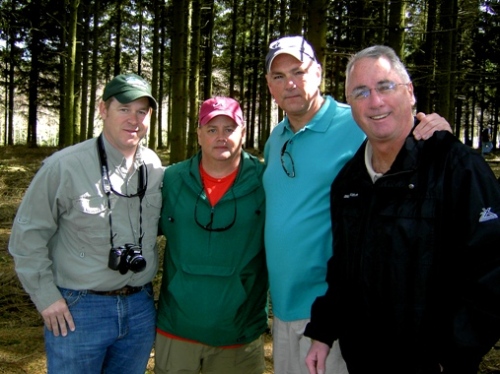 Our final historical stop of the day was at the American monument to the Battle of the Bulge, at Mardasson, near Bastogne. 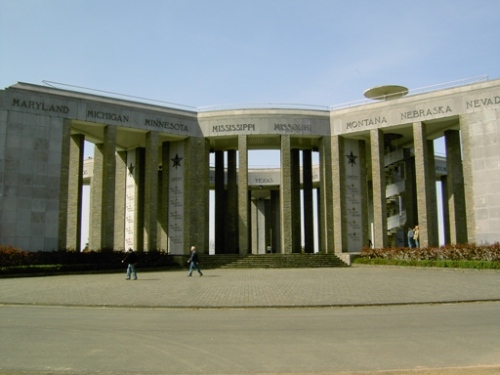 From there it was back to Bastogne’s central square (McAuliffe Place) for lunch.

Dan, Birdie, Ron and I ate at Le Nuts Café. The restaurant is named for the reply the 101st AB Div acting commander, General Anthony McAuliffe gave to the German’s demand for surrender – not for the specialty of the house. 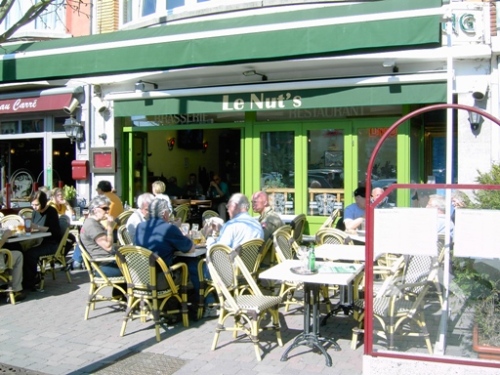 Some of our gang eating outside "Le Nuts Cafe."

As I write this, we are on our way to Luxembourg City for dinner and the evening.