Oh, my! I don’t think we want to do that again. Mrs. Poolman and I planned a “stock the bar” couples bridal shower for last Saturday evening and it came within a hair of being a disaster. As it was, it was just a nerve wracking fiasco.

As I mentioned in an earlier post, we made the mistake of indicating “regrets only” on the printed invitation, and only four people out of 67 invitees called to “regret.” We knew deep in our heart that a fair number of those remaining invitees were not planning to attend, but they either didn’t care enough to call and “regret” or were not properly trained by their mothers in proper social behavior. (A little to snarky? Well, I’m feeling it.)  However, we had no idea how many that would be. When you are planning and buying for a crowd, the difference between, let’s say 30 guests, and 63 guests is significant.

Nonetheless, on Saturday morning, Mrs. P and I got up and started preparing for the 7:30 pm party. I worked mostly outside, while Mrs. P concentrated on the food and inside cleaning. Around 3:30 pm, Mrs. P headed to the grocery store for one last run of supplies, while I finished up a few final details around the house. Then the heavens opened up and dumped around two inches of rain on our house and yard. “No problem” I said to myself. “Better to have it rain now than later in the evening.” 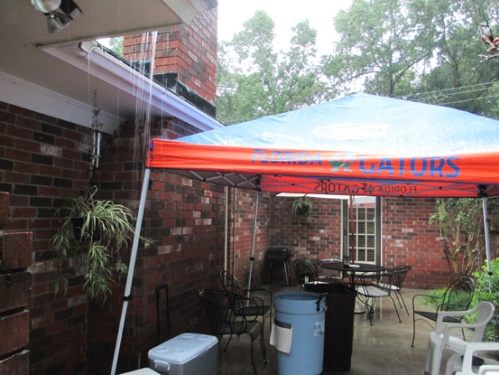 Down comes the rain!

And then the lights went out. Ugh.

A branch had fallen and knocked down a power line down the road. “No problem,” we think. There is plenty of time for them to repair it before the party.  By a 6 pm, prospects were looking dark, in more ways than one. Our daughter, Writer Princes (WP) offered to allow us to move the party to her house, which is about a five-minute drive away. Several members of the groom’s family (for whom we were doing the party) came down to help move coolers of beer, wine, plates of food, etc.

Just as the cars started to pull away, the lights came back on again. We unloaded everything back into the house and five minutes later, the power failed again.  At that point, we decided to just stay where we were and take our chances.

Candlelight isn’t very romantic when it is the only alternative.

The guests began arriving around 7 pm (A half hour early? What is that all about?) and continued straggling in until 8:30 pm. Most of the guests just hung around the back yard and patio. The weather was warm and humid, but at least it didn’t rain again.  The lights finally came back on around 8:45 and we were able to get the couple to open their presents and actually see what they were opening.

Finally the lights (and AC) came back on.

Despite all the angst, I think everyone seemed to have a good time. There was lots of food and lots of beer and wine. We definitely had enough to eat and drink because here is the final tally.

No. We’re not doing that again.