This blog is going to take a different slant over the next two weeks. I am joining my brother and two friends on a two-week tour of Europe. We are visiting Paris, Normandy, Netherlands, Belgium, Luxembourg and Bavaria. I am going to use this blog platform as a way of keeping our families up to speed on our “adventures.” Here is the story.

Last Memorial Day weekend, my friend, Birdie, pulled me aside at a backyard pool party at our house and said that he and his wife were planning a trip to Europe in 2012. They were looking for another couple to go along. Like me, Birdie is a bit of a military history geek. The prime purpose would be to visit the D-Day beaches at Normandy, but with additional travels from there. Details to be worked out later. We agreed in principal that we would go along.

Less than two weeks later, I got a call from my brother, who is an attorney in the Harrisburg, Pa. area. He told me about a tour he had read about in the local newspaper. He then went to an introductory meeting. Essentially, this tour is a “Band of Brothers” tour. The official title is “In the Footsteps of Maj. Dick Winters.”

For those of you who might not be aware, the book by Stephen Ambrose and the subsequent HBO mini-series followed the World War II action of one specific company of paratroopers in the 101st Airborne Division, from Normandy, on through Holland, Belgium and Germany. Dick Winters was the company commander for much of the war, and the center point of much of the narrative. Winters was a resident of SE Pennsylvania, and something of a local hero. All that explains why a historical society from Hershey, Pa. would put together this specific of a tour. (FYI – Winters died just a few weeks ago.)

So I got off the phone and talked with Mrs. Poolman. She said she had no interest in going on this military history tour, but I should call my brother back immediately and tell him to count me in.

That put me in the awkward position of having to go back to Birdie and tell him that “I have a better offer.” To make long story short (or shorter, anyway) Birdie found himself a roommate, Ron, and the two of them joined up with the Band of Brothers tour.

As I write this, I am sitting in the Charlotte (NC) Airport awaiting our flight to Charles DeGaulle Airport.  Birdie, Ron and I will be spending two extra days on our own in Paris before meeting up with the rest of the tour group on Thursday.

I’ll be posting more updates and photos as time and WiFi access permit.

Slow weekend and “The Pacific”

We had a semi-slow weekend. Saturday consisted of going out to lunch and running errands. Writer Princess, SIL and a couple of their friends came over in the late afternoon to hang by the pool. We made sandwiches for dinner and watched a movie. Sunday wasn’t any more exciting with about a ton of laundry. I also cleaned up our home office, which has been a mess ever since we just dumped a bunch of stuff in there during our “home improvement” project last winter.  We have more company coming next weekend (Mrs. Poolman’s side of the family),  and I needed to make at least enough room for a blow-up mattress. 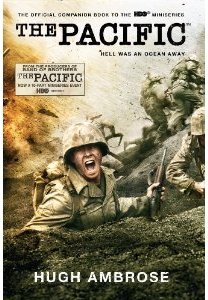 I have to confess I was somewhat disappointed. As much as I am a military history geek, I still did not feel myself being pulled into the story. The book follows the lives of four Marines and one naval aviator through World War II in the Pacific Theater. It simply was not as compelling as its antecedent, “Band of Brothers.” In BoB, the story followed one group of paratroopers from their initial training to VE Day. While some of the characters came and went, there was one consistent thread of continuity. In “The Pacific,” however, the four characters each had their own separate stories. Occasionally, those story lines would touch another, but for the most part, they ran on different tracks.

I think Ambrose was further hindered by the fact that only one of those five main characters is still alive. On the other hand, his father was able to personally interview his primary characters in “Band of Brothers.” That book was published in 1992 when many WWII veterans were still alive. That gave “Band of Brothers” a closer, more intimate relationship between the reader and the characters. Hugh Ambrose worked mostly off of second sources, such as diaries and letters. The result is the characters are a little more distant and less compelling to the reader.

If you are a World War II history geek, you would enjoy “The Pacific.” If not, I’d give it a “pass.”