It’s November, and in the college football world, fans are starting to get riled up over the BCS rankings. I read an article on FOX.com yesterday  that projected LSU getting to the national championship game without even winning its division, let alone winning its conference. As much of a travesty that would be (It seems like almost anything involving Les Miles is a travesty.), I am even more amused over the debate regarding the “mid majors.”

As anyone who reads me knows, I am a big University of Florida football fan. It follows that I am also an SEC fan. Almost every year, we watch the SEC beat itself up.

This year is a good example. The three top teams in the SEC are probably Auburn, Alabama and LSU. So…

Alabama will play Auburn on Thanksgiving weekend, and may beat them.

So who is the best of that trio?

Of one thing you can be certain – when you play a schedule year-in and year-out that includes teams like Auburn, Alabama, LSU, Florida, Arkansas, Tennessee, Georgia, etc., and you come out ahead, you know you have a good team. To one degree or another, the same could be said about the rest of the major conferences.

Outside of those conferences, the “mid-majors” are another question. Schools like TCU, Boise State and, until last weekend, Utah, are portrayed as the raggedy urchins, left standing out in the cold; noses pressed to the window; and waiting for the BCS schools to throw them some table scraps.

I’ll concede that it is possible TCU or Boise State MAY be the best team in the country. The problem is – how will we ever know? They run up impressive records and statistics, while playing schedules consisting of Sister Mary’s School for the Deaf and Blind.

Utah was another school that was considered a top contender. 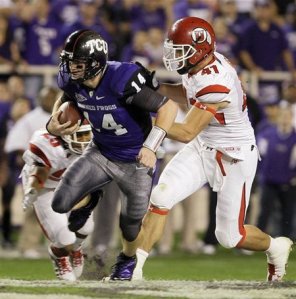 They were undefeated and had accumulated impressive stats while playing a bunch of weak sisters. They were ranked in the top ten of all polls. Then they played TCU. They not only lost; they were blown out of the stadium by 40 points!

Oops! Maybe we were wrong.

So what is the answer? Since it doesn’t look like a playoff is going to happen anytime soon, I put the burden back on those “mid-major” schools.

PS to Boise State: Paint your field the right color! 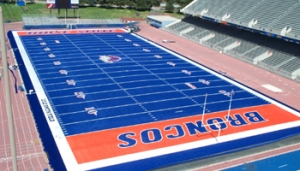 Normally, I'm a big fan of orange and blue...but really!

You may think the blue field makes you special, but the rest of us just laugh and point to it as another example of you being a minor league player.

A tough call in Knoxville

SEC football fans are a-blog over the arrest late last week of three University of Tennessee football players on charges they tried to rob someone using a pellet gun.

Some Florida fans are chortling in their beers over this development. One of the “three “Armed Amigos”, as some are calling them,  Nu’keese (aka: No Keys, or, he hopes, No Case) Richardson is a freshman receiver. He was a center of controversy last winter. Nu’keese was a Florida verbal commit who signed at the last minute with Tennessee. UT coach Lane Kiffen loudly held up (no pun intended) Nu’keese as an example of his recruiting prowess. And Nu’keese was the recruit Kiffen accused Urban Meyer of cheating to get to sign. Nu’keese is not an anonymous freshman.

I don’t  think the fans of any major football power should be laughing too hard. Remember, “those who live in glass houses…” Florida has had its share of problems. To anyone who is snickering, remember, you could be next.

It will be interesting to see how UT handles the issue. Unlike some, I won’t say “throw them out” before their case is ever ajudicated.  That’s too easy. You have to remember these are 18 year old dumb a__s. Would you throw out your own son if he got into trouble? You can’t just ignore it either.   The proper course should be well thought out.  What is best for the players and for justice? I don’t know what the exact right action is. I wonder if Coach Kiffen does. No matter what he chooses, he will be vilified by some group. It’s a no-win situation (kind of like quite a few UT football games this season. Ha!)  That’s why you get paid the big-bucks,  Lane.

Now that I’ve taken the high road, let’s get back down in the ditch for a while.

What do you say to a Tennessee football player when you see him in a suit and tie?

Would the defendant please rise?

Mrs. Poolman and I took off to Florida again this weekend. Poolboy and GF stayed at the house to keep the mutts company and make the house look lived-in.

Our first stop was Jacksonville. Friday was Mrs. Poolman’s birthday. I won’t give away her age. Let’s just say she started counting backwards a few years ago and she is looking forward to her 40s.

Both her sisters, brother in law, niece and husband and nephew and girlfriend met us at Outback Steakhouse for a birthday dinner.  That was fun. Youngest sister baked a cake and brought it for dessert. We got very lucky. Mrs. Poolman had driven the last hour into Jacksonville. When we went out into the parking lot after at least an hour and a half in the restaurant, the headlights on her CRV were on. Ninety minutes of burning the headlights and it still started up without a problem. I need to check to see the brand of that battery and stick with it. That is much better performance than we deserve.

In past years, we have spent at least one night on football weekends at a motel. This year, youngest sister has offered her house for overnights. The reason this hasn’t happened before now is too much to go into. So we spent Friday and Saturday night at her house.

Saturday was game-day with our nephew using the third ticket. The crowd was markedly different from the week before. Just a lot more people. I think there are a bunch of people who come out to tailgate for big games but stay home for the easy ones. We were on campus by 9:30 am for a 3:30 pm game and got there just in time. As it was, the general area of our tailgating was so crowded with cars, we had difficulty even getting to a good spot. It turned out, we ended up right back in the same spot we were last week.

The game was good – crowded and hot. The Gators played poorly but won anyway. Better than playing poorly and losing.

We went back to Jacksonville after the game and watched Georgia and Arkansas try to set an all-time no-defense scoring record. Georgia came out on top, but with no credit to their defense.

We’re back in Savannah. Our children are taking us out to dinner for Mrs. Poolman’s belated birthday. Should be fun. They are taking us to a tapas restaurant. Mrs. Poolman and I have not been there before, so we’re looking forward to it.